The World Union For Progressive Judaism is the international umbrella organisation of the Liberal, Progressive and Reconstructionist movements, serving 1 200 congregations with 1.7 million members in 42 countries. It is the largest Jewish religious movement in the world.  The World Union strengthens Jewish life in Israel and worldwide by establishing and supporting modern, pluralistic congregations and institutions, developing Jewish communal and youth leadership and advancing social justice.

The World Union was founded in London in 1926, under the dynamic leadership of Lily Montagu and Dr Claude Montefiore. The aim was to unite all the disparate progressive movements around the world into a single organisation. The first international convention was held two years later in Berlin, original home of the Progressive Reform movement. Ironically, this was to be the last major Jewish initiative in Germany before the rise of Hitler.

Progressive Judaism is rooted in the Bible, especially the teachings of the Hebrew Prophets. It is founded on authentic manifestations of Jewish creativity, ancient and modern, particularly those that stress inwardness and desire to learn what God expects from us: justice and equality, democracy and peace, personal fulfillment and collective obligations.

The practices of Progressive Judaism are anchored in Jewish thought and tradition. They seek to extend the range of observance by granting full equality to all Jews, irrespective of gender and sexual orientation, while challenging laws that are contrary to Judaism’s fundamental principles.

Of the 12 million Jews in the world today, nearly one-third lives in countries where Jewish life is weak and where there are few opportunities for meaningful Jewish practice. It is the World Union’s goal to ensure that all Jews have access to the vibrant Jewish life that can best inspire them spiritually and bring their communities together practically. We are committed to this sacred task. 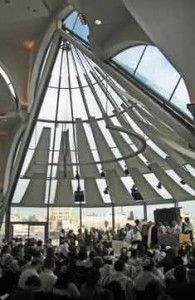 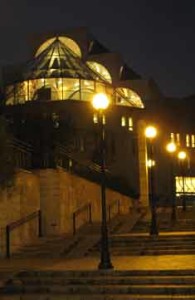 WUPJ headquarters by night, seen from a footpath leading up from the Old City

Personal impressions of the WUPJ 2007

SAUPJ treasurer Jeff Carel gives his impressions of the South African delegation’s experiences at the WUPJ convention in Jerusalem in 2007.

PLUS: Pictures of the delegation