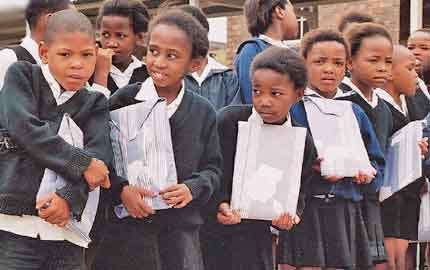 At the MC Weiler School in Alexandra, some of the one thousand pupils line up for their certificates at the end of the year prize-giving

THE UNITED SISTERHOOD, an affiliate of the South African Union of Temple Sisterhoods (the national body) is the umbrella body for the three Johannesburg-based synagogue sisterhoods, who follow the “Jewish Way” by enhancing their spiritual duties by contributing to their society. It is a private service organisation, internationally known for it’s active participation in both education and community work. The key areas in which it aims to provide welfare are social problems affecting those with the least resistance, the young and the aged. Issues the sisterhood deals with include:

To serve irrespective of race, colour or creed.

Four paths to the Jewish Way

The United Sisterhood focuses on four specific areas of the Jewish Way, which are:

The United Sisterhood does this in various ways.

To take care of our own. This is done through the Jewish Family Assistance Project, where the United Sisterhood gives a hand-up – not a hand-out – to Jewish families or single mothers who have fallen on hard times.

To take care of the aged. The Eve Kantor Golden Age Friendship Club has monthly meetings in the Temple Emanuel hall, where exercises and entertainment are provided, as well as a nourishing tea. Food parcels are given out several times a year.

To help the sick. The Medicare and Support Fund for the Aged sees that necessary medication, which the hospitals cannot supply, is made available. Transport to hospitals is also provided. Tara and Sizwe hospitals are visited monthly, as are Sandringham Gardens and the Selwyn Segal Hostel.

To feed the hungry. Food collections are held monthly at various Pick ‘n Pay stores to assist in the daily feeding of about 2 500 children at their places of learning. This project also helps in giving food parcels to the aged and Jewish families. Apart from the nourishing school lunch supplied to all needy children, those with HIV/Aids are given a high protein breakfast to help raise their immune systems.

OTHER PROJECTS The United Sisterhood’s help and assistance doesn’t end with the above projects. Various schools receive attention, one of which is the New Nations School in Vrededorp, where nearly all the 1 200 children have been taken off the streets and are housed in a hostel.

According to Ellen Appleton, past chairman of the United Sisterhood, the school closest to our hearts is the MC Weiler School in Alexandra, which has just under 1 000 children. “We celebrated its 60th birthday in 2005. The school was started in 1945 by Rabbi Moses Cyrus Weiler and the women of the Sisterhood after they discovered many young children playing in the dusty streets of Alex while their parents were at work or looking for jobs,” says Appleton.

Winner of the Absa award

“This is a true feather in our cap,” says the South African Union of Temple Sisterhoods national president, Monica Solomon.

“The United Sisterhood was put in the spotlight throughout the Jewish community in Johannesburg, and hopefully, this excellent publicity will make people more aware of the tremendous work undertaken by the Sisterhood women”.

Absa has sponsored these awards for many years and, according to Louis von Zeuner, group executive director of the bank, it is an opportunity for us to salute the achievements of individuals who are helping to transform and build our country, and to pay tribute to a community whose traditions and rich history in South Africa have helped to produce them.

Sybil Abro, honorary life president, accepted the award on behalf of the United Sisterhood. Abro’s acceptance address acknowledged the many women who, for more than 70 years, have served the community unselfishly. 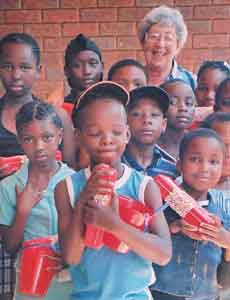 Ellen Appleton, past chairperson of the United Sisterhood, presents gifts to pupils at the New Nation school, which educates, feeds and houses street children

The United Sisterhood has offices in the grounds of Beit Emanuel in Parktown.

The Sisterhood also has a display of Judaica in the foyer of Beit Emanuel, and these items are for sale to raise money. 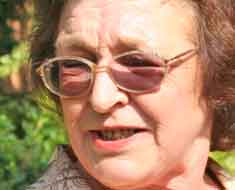 Marilyn Trujillo is chairperson of the United Sisterhood until 2010